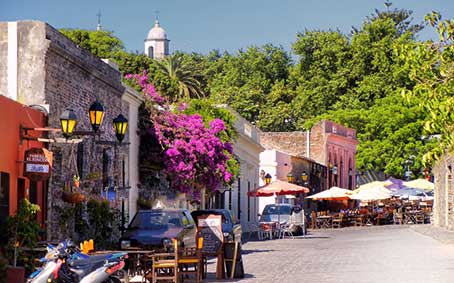 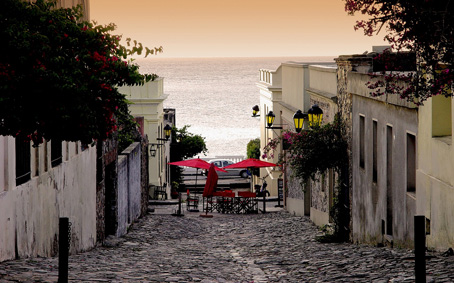 
DAY TOUR to Colonia de Sacramento (Uruguay) from Buenos Aires. The District of Colonia is in the south west of the Oriental Republic of Uruguay. It is situated 178 km from Montevideo and only 40 km from the city of Buenos Aires. Washed by the Río de la Plata, the area offers over 200 km beaches and several islands along its coastline. Colonia del Sacramento and Carmelo are in this district, both of utter importance in the historic development of the country. Colonia del Sacramento is situated in the peninsula founded by the Portuguese in 1680, who settled on the coast as they considered them strategic for expansion over the Río de la Plata. Due to this, the area which has been disputed by the greatest European countries is known as “The Apple of Discord”. Its population is formed by immigrants of Swiss, German, Spanish, Portuguese and aborigine origin. The historic area of the city preserves its paving stone streets of the colonial times, and has been declared “Cultural Inheritance of Humanity” by UNESCO. Carmelo is situated on the margins of Las Vacas stream, which keeps important traffic of nautical tourism. Other main sights are the Rambla de los Constituyentes, Playa Seré, Zagarzazú Beach, the Hotel Casino and the Fauna Reserve.
07:15 hs.: check-in in Darsena Norte (Buenos Aires BQB pier).
08:15 hs.: departing in Fast Ferry to Colonia.
09:30 hs.: arrival in Colonia. Lunch in "Viejo Túnel" (fixed menu, no drinks included). Walking tour (Historical District and the Coast up to Real de San Carlos-Bullring) and ticket for auto guided Touristic Bus (only from Monday to Friday).
18:45 hs.: transfer to Colonia Port.
19:45 hs.: departure to Buenos Aires port in Fast Ferry.
21:00 hs.: arrival to Darsena Norte (Buenos Aires BQB pier)