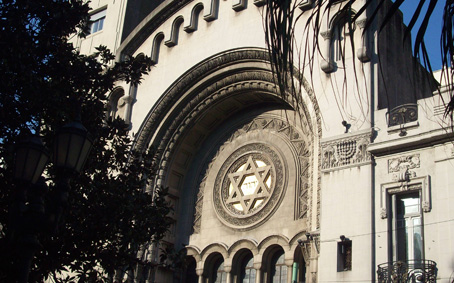 
Argentina's Jewish community is the largest in Latin America, with approximately 200,000 people, of whom nearly 180,000 live in Buenos Aires. Its origins trace back to the 16th century, when Jews from Spain, Portugal and Northern Africa came to our shores. Nevertheless, most of them came from Western Europe during the 19th and 20th centuries. The presence of this community in the city's political, economical and cultural life is very strong, and has left a lasting mark on Buenos Aires. In this tour, we'll visit some of the places that have typically been associated with it, and that now have become part of the city's historical and cultural heritage. Our tour starts at the Embassy of Israel Square, built on the spot once occupied by the Israeli embassy until 1992, when a brutal terrorist attack destroyed it. In order to preserve the memory of this terrible event, the old façade has been kept; 22 trees were planted in the square, commemorating the same number of victims; and two large plaques were placed to represent fraternity between Jewish and non-Jewish people. Next, we visit the new building of the Argentine-Israel Benefit Society, best known as AMIA (only mornings). Its original building was destroyed by a new terrorist assault in 1994 that killed 85 people. This institution is one of the most traditional in Argentina. Its mission is to promote Jewish culture in our country, to keep its traditions and to foster the development of the Jewish community. Nevertheless, its doors are open for every Argentinean, and it offers job and educational opportunities to anyone interested. Ending our journey, we visit the neighborhoods typically associated to the Jewish community: Abasto, where we can find (at the Abasto Shopping Mall) the only McDonald's franchise serving kosher food in the world -outside of Israel; Villa Crespo and Once, where we'll visit the Templo Paso, one of the most important Ashkenazi synagogues in the country.