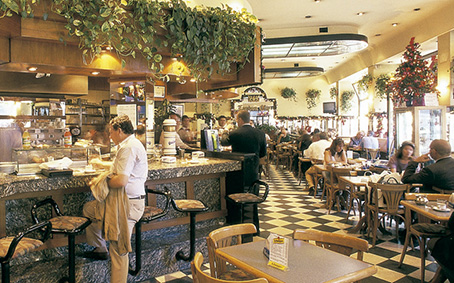 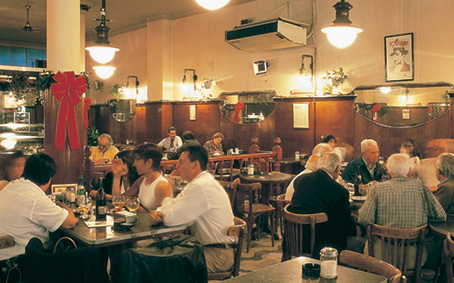 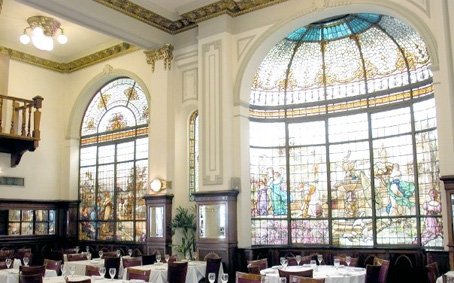 
In 1998, the Government of the City of Buenos Aires passed a law to protect and promote the city's Remarkable Cafés. In this tour, you'll have the chance to visit four of them, all of them located in traditional areas of the city, and to experience that typical Porteño habit of getting together at a coffee shop to talk for endless hours and honor friendship. Our journey starts at the neighborhood of Montserrat, near the Plaza de Mayo. A few blocks from there lay La Puerto Rico, founded in 1887 on Peru and Alsina and moved to its actual location in 1925. There used to gather writers and intellectuals such as Paul Groussac, Arturo Capdevila and Rafael Obligado. The establishment owes its name to its owner Gumersindo Cabedo's fascination for Puerto Rico, where he lived for some time. Next we visit London City, a coffee shop that became famous after being mentioned by Julio Cortázar in his novel Los Premios [The Prizes]. The café is located in the ground floor of a building built by E.A. Merry that used to be part of the annex of the traditional Gath y Chaves department store, in Buenos Aires' financial district. Then we travel to San Telmo, where we visit the Bar Dorrego, located on the corner of Defensa and Humberto Primo. From its tables, overlooking the traditional Plaza Dorrego, we'll soak in the Colonial atmosphere of this charming, historical neighborhood. Finally, we arrive to Almagro. On the corner of Rivadavia and Medrano we find the sumptuous Confitería Las Violetas, opened in 1884 with the presence of President Julio Argentino Roca. After being closed for three years, it reopened in 2001, completely and spectacularly refurbished. Writers such as Roberto Arlt and Alfonsina Storni were regulars. Just to imagine the kind of luxury we'll see there, here's a simple fact: the café has 80 square meters of splendid vitraux.