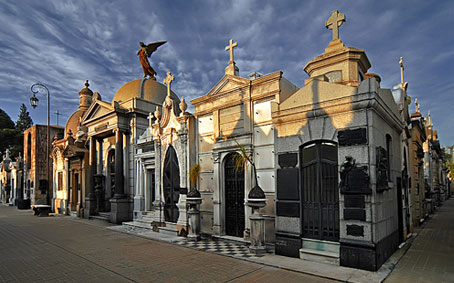 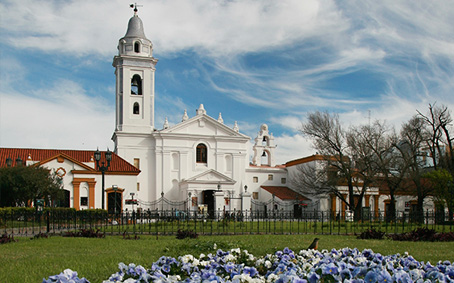 
In the early 20th century, the Argentine aristocracy experienced its Golden Era of prosperity. In order to show off that opulence, French architects and engineers where promptly summoned, and where charged with the design and construction of buildings that would allow for Buenos Aires to rival with Paris, back then undisputedly the center of the world, while shaking off at the same time the city’s Colonial heritage, transforming Buenos Aires into South America’s leading metropolis.
Our starting point is Plaza San Martín, without a doubt the most sumptuous of the city’s plazas. Around Plaza San Martín stand tall some of the city’s most conspicuous buildings, such as the former Palacio Paz. This 12,000 square meter palace, which Paz never got to see completed in his lifetime, nowadays houses the Military Society.
We start our visit of Recoleta at the namesake Cemetery. Once through the doors of this colossal necropolis, we’ll be forced to discredit the popular notion that we are all equal in death. There, we’ll admire the ornate mausoleums and funeral monuments by famed architects and artists, and we’ll pay a visit to the final resting place of Eva Perón, whose presence in the Cemetery is utterly ironic, considered she championed the poor and the humble against her hated “oligarchs”. Next to the Cemetery, we find the Basílica de Nuestra Señora del Pilar, the second oldest in Buenos Aires.
Next, we visit Palermo Chico. Around the massive Bosques de Palermo (Palermo Woods), designed by Charles Thays for the May Revolution Centennial, together with parks, squares, woods and artificial lakes, we’ll have the chance to admire more luxurious palaces and mansions. We’ll also visit the Palermo Rose Garden, a beautiful park that houses many species of Western civilization’s most famous flowers.