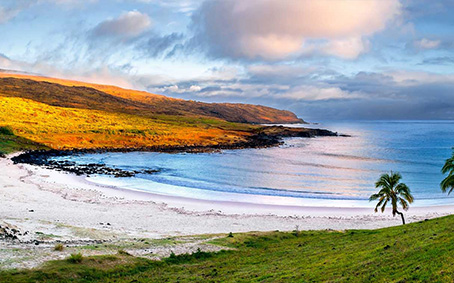 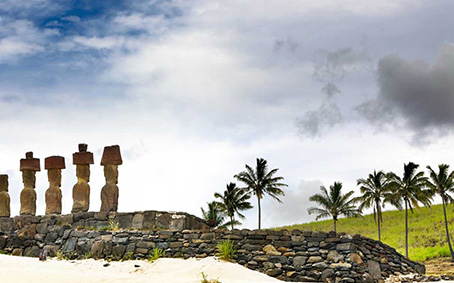 
Departure from the hotel to the east coast of the island to visit the Ahu Vaihu and Akahanga, temples composed of platforms or stone altars where assemblies of Pukaos and Moais are gathered. Continuing the trip we will go to Rano Raraku, volcanic crater formed of consolidated ash and containing a lagoon inside. The volcano has a historical relevance for the island, since on its slopes the Moais were carved, where 397 of these sculptures currently remain. Then we will visit the most amazing Ahu on the island, Ahu Tongariki which has 15 huge Moais. Although it is worth clarifying that it is the Ahu Te Pito Kura that has the largest statue erected in an Ahu: the Moai Paro, 10 meters high and 85 tons in weight. Next to Te Pito Kura is a large spherical stone that is identified as the navel of the world: Te Pito or Te Henua. Finally, we will end the day resting in Anakena which is the most popular beach on the island. In addition to its natural beauty, what makes it unique is a row of Moais that turn their backs on the sea. Without a doubt, a unique landscape that we will enjoy before returning to the hotel.