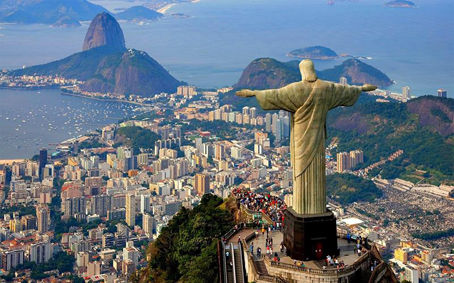 
Drive along the downtown area of Rio until reaching the famous football stadium of “Maracanã” (inside visit not included). From there continue back through the center of town (old part of the city) passing by the Sambadrome, Modern Cathedral and Municipal theatre. Continuing via Flamengo Park until reaching Urca neighborhood and Praia Vermelha cable car Station where you will be taken to the Urca Mountain (mid-way station) with its gardens and look-out points. Then, the second part of the ride will take you to the peak of the Sugar Loaf Mountain, 400 m.a.s.l. Sugar Loaf is located in a neighborhood called Urca at the entrance of Guanabara Bay. It is group of two mountains, one called Urca Mountain and the other called Sugar Loaf. The original cable cars were inaugurated in 1912. In 1972, the construction of a new aerial path was concluded within new standards and using modern technology.
Corcovado lookout is set 709 meters above sea level, at the very top of the mountain with the same name. From there, the visitor can see nearly the entire city of Rio de Janeiro. Also located at this world-famous tourist site, is the “Cristo Redentor” statue (Christ, the Redeemer). Corcovado is set right in the "Tijuca Rainforest National Park” (the largest urban park in the world) which is in the heart of the city of Rio, being considered by locals as the “lung of the city”. A cogwheel train, constructed by Swiss engineers, takes visitors up–passing lovely parts of the forest allowing visitors to have panoramic views of the city while climbing up. Finally, after reaching the mountain top, escalators are available as well as elevator to assist passengers reaching the statue – which stands on its 28 meters of height. And the most marvelous view of the city!