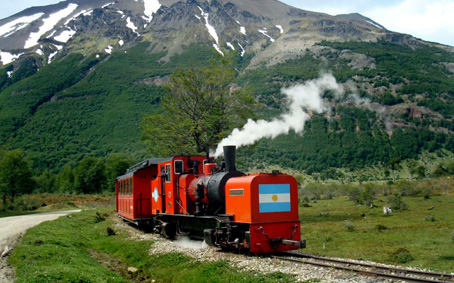 END OF THE WORLD TRAIN


The train departs from End of the World station, by the same embankment prisoners walked 100 years ago.
It goes into Cañadon del Toro, cross Pipo River over "the burned bridge" where you can see Old Wooden Bridge ruins under the new railroads. Then stops at “La Macarena Cascade" where passengers will find a reconstruction of a typical settlement of an indigenous group who inhabited these lands for hundreds of years: The Yamanas. Now the train enters Tierra del Fuego National Park following the Pipo River course and continues across areas that show us traces left by prisoners in their daily routine to cut trees for nearly half a century of interrupted work.
After skirting the Turbal, characteristic Tierra del Fuego soil, on which is developed a moss called Sphagnum, the train arrives at “Park Station”.
Throughout the tour the visitor will be accompanied by a bilingual English-Spanish guide, explaining in detail the "prisoners Train" history.

END OF THE WORLD TRAIN